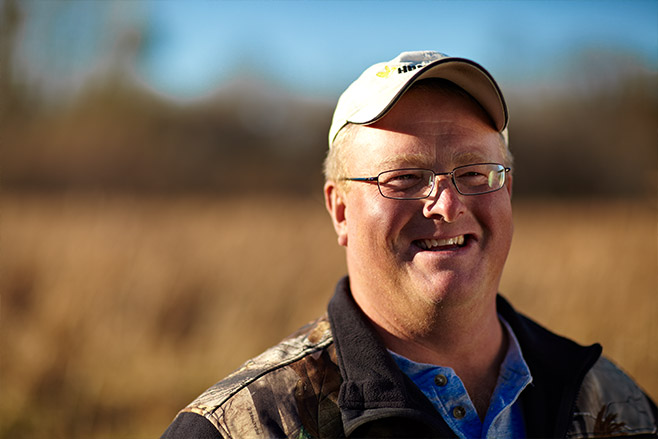 Tom, a 42-year-old resident of Waseca, MN enjoys an active lifestyle. Between his job as a utility lineman and his love of outdoor activities, Tom was always on the move. However, when chronic pain developed in his left hip in 2006, he feared that he would have to make some unwanted changes to his daily life.

The discomfort began as a dull ache, but over time became so acute that even walking became difficult and Tom developed a limp. His physician informed Tom that he would eventually need a hip replacement, but encouraged him to hold off if the pain was tolerable.

Over the next several years, Tom met with four different doctors, each one telling him the same thing- – due to the wear and tear on his joint, he needed to have his hip replaced. Though he knew surgery was unavoidable, he was apprehensive. In early 2011, Tom scheduled a traditional hip replacement, however as the date crept near, he began having misgivings and canceled the operation.

About six months later, Tom came across an article in his local newspaper about the SuperPath® Total Hip Replacement procedure from MicroPort. The article described how the procedure was unique from traditional methods because the implant is built inside the body, so the hip is never twisted into unnatural positions during surgery — a common element to many other hip procedures. The SuperPath® technique enables surgeons to take into account each patient’s unique anatomy and select the most appropriate implant. No muscles are cut during surgery.

Tom searched for local physicians who performed this technique and contacted Dr. Dean Olsen, an orthopedic surgeon at Saint Francis Hospital in nearby Shakopee. Dr. Olsen confirmed that Tom would be a good candidate for the SuperPath® technique and explained that he would possibly be back on his feet within hours after the surgery and should have an accelerated rehabilitation.

A few months later, Tom’s hip had deteriorated to the point where he experienced excruciating pain with every step that he took. He knew that it was time to take action.

On April 24, 2012, Tom received a new left hip. As Dr. Olsen predicted, he was walking around just five hours after the procedure and was discharged the following day. After completing 3 weeks of physical therapy, Tom walked without a limp, went back to work without pain and resumed many of his outdoor hobbies. “My biggest worry was that I would limp again, but I have no limp. I have a hard time believing it myself,” Tom said. ”I can do more now than I could before the surgery. My only regret is that I didn’t get the procedure done years ago!”