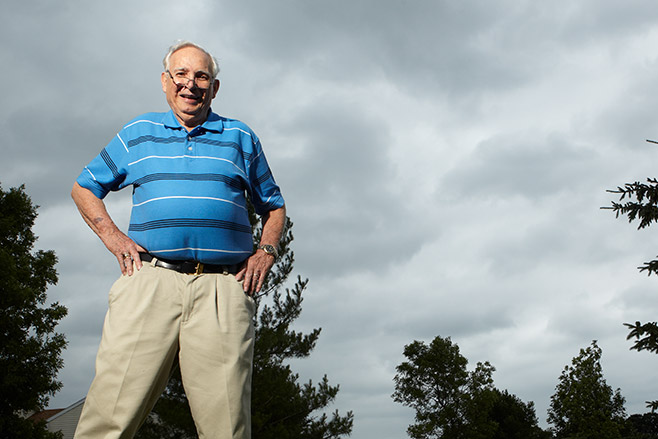 Dick isn’t your average 77 year old. While many people his age may start to slow down, Dick’s recreational calendar is still full, as the Owatonna resident golfs and bowls regularly. A typical weekend may include an outing to the golf course or bowling alley, attending one of his grandchildren’s games and enjoying a dinner with family and friends. However, the many years of activity have taken their toll on his body and resulted in the replacement of both knees and his right hip. When Dick started to feel that familiar arthritic pain in his left hip in late 2004, he knew it too would eventually need to be replaced.

At first, the pain wasn’t enough to hold Dick back from his activities. As time passed, however, the discomfort became more intense. For a while, over-the-counter medications managed the pain and kept him active, but five years after the onset of symptoms, Dick was in agony. He couldn’t golf and wasn’t able to sit in the stands at his grandchildren’s games. It was time for another hip replacement and Dick began to mentally prepare for one more surgery along with the grueling physical therapy needed to fully recover. He made an appointment with Dr. Dean Olsen of the Owatonna Clinic and was soon amazed at the technological advances in orthopedics since his first hip replacement more than 14 years prior.

Dr. Olsen recommended using the SuperPath® Total Hip Replacement technique by MicroPort. Dr. Olsen explained to Dick that he should experience less post-operative pain because the hip isn’t dislocated during the procedure and that his recovery time would likely be reduced.

In October 2010, Dick was implanted with his new hip. He awoke from surgery without feeling the throbbing arthritic pain that had been with him for the better part of five years. Just a few hours after major surgery, he was moving around the hospital floor with only the assistance of a walker. A week later, Dick was walking largely unassisted, surprised at how quickly he was able to get up and around after the operation.

Dick committed himself to the physical therapy needed to regain his strength and fully recover. In fact, he recently placed first at a bowling tournament with more than 30 competitors. Today, having resumed his active lifestyle, Dick said, “At first I dreaded the thought of undergoing another hip replacement. However, after learning about the SuperPath® technique I felt at ease, and the results have certainly confirmed that feeling!”