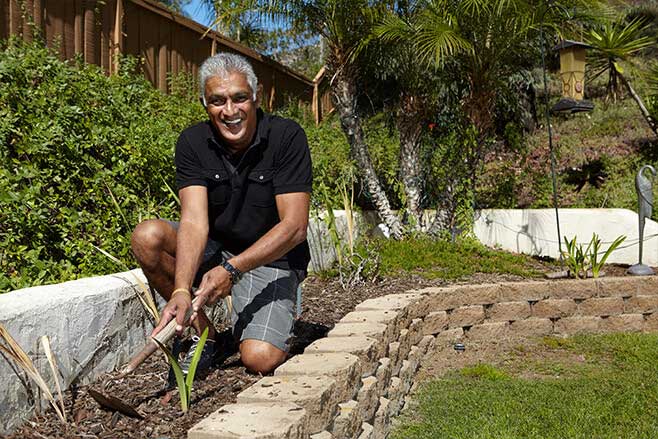 Thanks to the outstanding weather in Southern California, David, a 57-year old resident of Rancho San Diego, Calif., could often be found outside walking his dog, playing golf or soaking up the sun. His active lifestyle included plenty of time at the gym as well, but little did David know that a single pain a few years ago would force him to the sidelines and result in two hip replacements.

It started when David awoke to a sharp, stabbing pain and stiffness in his left hip. Thinking it was a case of bursitis, he took some over-the-counter pain relievers and tried yoga but the discomfort worsened to the point that he developed a severe limp, was unable to sit for extended periods and could not put on his shoes and socks without doubling over in agony. An MRI revealed a life-altering diagnosis: avascular necrosis, a condition whereby the hip bone dies from a lack of blood flow. A hip replacement was all but inevitable.

David’s quality-of-life was in disarray as his balky hip made it difficult to deliver presentations at his job and he quickly gave up all physical activity. Nine months after his ordeal began and walking with a cane for support, David contacted Dr. Harbinder Chadha of LSC Orthopaedics at the recommendation of a co-worker.

Dr. Chadha believed that David was an excellent candidate for the SuperPath® Total Hip Replacement technique by MicroPort, a method whereby the implant is built inside the body, so the hip is not dislocated or twisted into unnatural positions during surgery, which is a common element to many other hip procedures. Dr. Chadha informed David that this approach avoids cutting muscles so that it often results in minimal postoperative pain and lends to a fast hospital recovery.

In November 2010, David received a new left hip. Much to his surprise, he was sitting up in bed immediately after surgery and the pain that he lived with for years was completely gone. David was walking around the hospital just two hours after leaving the operating room and was sent home the very next day.

23 hours after his operation, David walked unassisted through the front door of his house, up a set of stairs and took a shower. Three weeks later, he was back at the gym and a few weeks after that, was back on the golf course.

“Although Dr. Chadha prepared me for it, I couldn’t believe how quickly I recovered from the procedure,” said David. “I never imagined that my second hip replacement would go even better.”

Although David was under the impression that his right hip was unaffected by the avascular necrosis, he felt the familiar discomfort take hold in 2012. Once again, he was left virtually immobile and once again, he paid a visit to Dr. Chadha, who scheduled another SuperPath® Total Hip Replacement surgery.

In July 2012, David received a new right hip via the SuperPath® technique. Going in, David had merely hoped to repeat the positive experience from his earlier procedure in 2010, but he was amazed at the chain of events following his surgery.

“I was wheeled into recovery room at 10 a.m. and just one hour later, I walked unassisted to the bathroom,” said David. “That afternoon, my doctor informed me that there was no need to spend the night in the hospital. I was discharged at 5 p.m., nine hours after I underwent hip replacement surgery.”

David’s recovery progressed quickly: he was doing light exercises in the gym after one week and completed physical therapy in one month. By the end of September, he expects to be teeing off.

“I can’t say enough about Dr. Chadha,” concluded David. “Never in my wildest dreams did I anticipate such an easy recovery. I hope that anyone who needs a new hip will consider SuperPath®.”